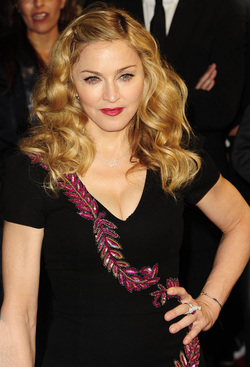 After a star reaches a certain point, it's easy to forget what they became famous for and concentrate solely on their persona. Madonna is such a star. Madonna rocketed to stardom so quickly in 1984 that it obscured most of her musical virtues. Appreciating her music became even more difficult as the decade wore on, as discussing her lifestyle became more common than discussing her music. However, one of Madonna's greatest achievements is how she manipulated the media and the public with her music, her videos, her publicity, and her sexuality. Arguably, Madonna was the first female pop star to have complete control of her music and image.


Madonna moved from her native Michigan to New York in 1977, with dreams of becoming a ballet dancer. She studied with choreographer Alvin Ailey and modeled. In 1979, she became part of the Patrick Hernandez Revue, a disco outfit that had the hit "Born to Be Alive." She traveled to Paris with Hernandez; it was there that she met Dan Gilroy, who would soon become her boyfriend. Upon returning to New York, the pair formed the Breakfast Club, a pop/dance group. Madonna originally played drums for the band, but she soon became the lead singer. In 1980, she left the band and formed Emmy with her former boyfriend, drummer Stephen Bray. Soon, Bray and Madonna broke off from the group and began working on some dance/disco-oriented tracks. A demo tape of these tracks worked its way to Mark Kamins, a New York-based DJ/producer. Kamins directed the tape to Sire Records, which signed the singer in 1982.


Kamins produced Madonna's first single, "Everybody," which became a club and dance hit at the end of 1982; her second single, 1983's "Physical Attraction," was another club hit. In June of 1983, she had her third club hit with the bubbly "Holiday," which was written by Jellybean Benitez. Madonna's self-titled debut album was released in September of 1983; "Holiday" became her first Top 40 hit the following month. "Borderline" became her first Top Ten hit in March of 1984, beginning a remarkable string of 17 consecutive Top Ten hits. While "Lucky Star" was climbing to number four, Madonna began working on her first starring role in a feature film, Susan Seidelman's Desperately Seeking Susan.


Madonna's second album, the Nile Rodgers-produced Like a Virgin, was released at the end of 1984. The title track hit number one in December, staying at the top of the charts for six weeks; it was the start of a whirlwind year for the singer. During 1985, Madonna became an international celebrity, selling millions of records on the strength of her stylish, sexy videos and forceful personality. After "Material Girl" became a number two hit in March, Madonna began her first tour, supported by the Beastie Boys. "Crazy for You" became her second number one single in May. Desperately Seeking Susan was released in July, becoming a box office hit; it also prompted a planned video release of A Certain Sacrifice, a low-budget erotic drama she filmed in 1979. A Certain Sacrifice wasn't the only embarrassing skeleton in the closet dragged into the light during the summer of 1985 -- both Playboy and Penthouse published nude photos of Madonna that she posed for in 1977. Nevertheless, her popularity continued unabated, with thousands of teenage girls adopting her sexy appearance, being dubbed "Madonna wannabes." In August, she married actor Sean Penn.


Madonna began collaborating with Patrick Leonard at the beginning of 1986; Leonard would co-write most of her biggest hits in the '80s, including "Live to Tell," which hit number one in June of 1986. A more ambitious and accomplished record than her two previous albums, True Blue was released the following month, to both more massive commercial success (it was a number one in both the U.S. and the U.K., selling over five million copies in America alone) and critical acclaim. "Papa Don't Preach" became her fourth number one hit in the U.S. While her musical career was thriving, her film career took a savage hit with the November release of Shanghai Surprise. Starring Madonna and Penn, the comedy received terrible reviews, which translated into disastrous box office returns.


At the beginning of 1987, she had her fifth number one single with "Open Your Heart," the third number one from True Blue alone. The title cut from the soundtrack of her third feature film, Who's That Girl?, was another chart-topping hit, although the film itself was another box office bomb. 1988 was a relatively quiet year for Madonna as she spent the first half of the year acting in David Mamet's +Speed the Plow on Broadway. In the meantime, she released the remix album You Can Dance. After withdrawing the divorce papers she filed at the beginning of 1988, she divorced Penn at the beginning of 1989.


Like a Prayer, released in the spring of 1989, was her most ambitious and far-reaching album, incorporating elements of pop, rock, and dance. It was another number one hit and launched the number one title track as well as "Express Yourself," "Cherish," and "Keep It Together," three more Top Ten hits. In April 1990, she began her massive Blonde Ambition tour, which ran throughout the entire year. "Vogue" became a number one hit in May, setting the stage for her co-starring role in Warren Beatty's Dick Tracy; it was her most successful film appearance since Desperately Seeking Susan. Madonna released a greatest-hits album, The Immaculate Collection, at the end of the year. It featured two new songs, including the number one single "Justify My Love," which sparked another controversy with its sexy video; the second new song, "Rescue Me," became the highest-debuting single by a female artist in U.S. chart history, entering the charts at number 15. Truth or Dare, a documentary of the Blonde Ambition tour, was released to positive reviews and strong ticket sales during the spring of 1991.


Madonna returned to the charts in the summer of 1992 with the number one "This Used to Be My Playground," a single featured in the film A League of Their Own, which featured the singer in a small part. Later that year, Madonna released -Sex, an expensive, steel-bound soft-core pornographic book that featured hundreds of erotic photographs of herself, several models, and other celebrities -- including Isabella Rossellini, Big Daddy Kane, Naomi Campbell, and Vanilla Ice -- as well as selected prose. -Sex received scathing reviews and enormous negative publicity, yet that didn't stop the accompanying album, Erotica, from selling over two million copies. Bedtime Stories, released two years later, was a more subdued affair than Erotica. Initially, it didn't chart as impressively, prompting some critics to label her a has-been, yet the album spawned her biggest hit, "Take a Bow," which spent seven weeks at number one. It also featured the Björk-penned "Bedtime Stories," which became her first single not to make the Top 40; its follow-up, "Human Nature," also failed to crack the Top 40. Nevertheless, Bedtime Stories marked her seventh album to go multi-platinum.


Beginning in 1995, Madonna began one of her most subtle image makeovers as she lobbied for the title role in the film adaptation of Andrew Lloyd Webber's +Evita. Backing away from the overt sexuality of Erotica and Bedtime Stories, Madonna recast herself as an upscale sophisticate, and the compilation Something to Remember fit into the plan nicely. Released in the fall of 1995, around the same time she won the coveted role of Evita Peron, the album was comprised entirely of ballads, designed to appeal to the mature audience that would also be the target of Evita. As the filming completed, Madonna announced she was pregnant and her daughter, Lourdes, was born late in 1996, just as Evita was scheduled for release. The movie was greeted with generally positive reviews and Madonna began a campaign for an Oscar nomination that resulted in her winning the Golden Globe for Best Actress (Musical or Comedy), but not the coveted Academy Award nomination. The soundtrack for Evita, however, was a modest hit, with a dance remix of "Don't Cry for Me Argentina" and the newly written "You Must Love Me" both becoming hits.


During 1997, she worked with producer William Orbit on her first album of new material since 1994's Bedtime Stories. The resulting release, Ray of Light, was heavily influenced by electronica, techno, and trip-hop, thereby updating her classic dance-pop sound for the late '90s. Ray of Light received uniformly excellent reviews upon its March 1998 release and debuted at number two on the charts. Within a month, the record was shaping up to be her biggest album since Like a Prayer. Two years later she returned with Music, which reunited her with Orbit and also featured production work from Mark "Spike" Stent and Mirwais, a French electro-pop producer/musician in the vein of Daft Punk and Air.


The year 2000 also saw the birth of Madonna's second child, Rocco, whom she had with filmmaker Guy Ritchie; the two married at the very end of the year. With Ritchie as director and Madonna as star, the pair released a remake of the film Swept Away in 2002. It tanked at the box office, failing to crack seven digits, making it one of the least profitable films of the year. Her sober 2003 album, American Life, fared slightly better but was hardly a huge success; despite going platinum, it was her lowest-selling album to date. That same year also saw the release of Madonna's successful children's book, -The English Roses, which was followed by several more novels in future years.


Confessions on a Dance Floor marked her return to music, specifically to the dance-oriented material that had made her a star. Released in late 2005, the album topped the Billboard 200 chart and was accompanied by a worldwide tour in 2006, the same year that I'm Going to Tell You a Secret, a CD/DVD made during her Re-Invention Tour, came out. In 2007, Madonna released another CD/DVD set, The Confessions Tour, this time chronicling her tour of the same name. She then inched closer to the completion of her Warner Bros. contract with 2008's Hard Candy, featuring collaborations with the Neptunes and Timbaland. As poor as it was, the bold album did boast a Top Five hit in "4 Minutes," and it was supported with the Sticky & Sweet Tour, which concluded in September 2009 (a month prior to her filing for divorce from Ritchie) and produced yet another CD/DVD package, released in 2010. It was her final Warner Bros. release and set the stage for her long-term recording deal with Live Nation. She began work on her twelfth album midway through 2011, with the goal of releasing it early in 2012. Stephen Thomas Erlewine, Rovi