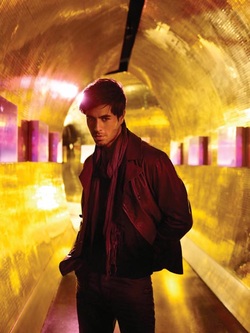 At the dawn of the new millennium, Enrique Iglesias was the best-selling Latin recording artist in the world. The son of multi-million-selling singer Julio Iglesias, Enrique was born in Madrid, Spain, where he lived with his mother, his brother Julio, and his sister Chabeli. In 1982, his mother sent them to live in Miami with their father. While there, Enrique was exposed to three different cultures and musical influences: Hispanic, European, and American.


Iglesias' own career started when he was still attending Gulliver Private School, a very prestigious school in Miami. He made his singing debut in a production of +Hello, Dolly, after which he began practicing his singing without his parents knowing. After a year studying business at the University of Miami, he decided to follow his passion for music. In 1995, he sang in person for his soon-to-be manager, who at Iglesias' insistence of not wanting to use his family name, first shopped his demos as an unknown Central American singer named Enrique Martinez. It wasn't until he earned a record deal with Fonovisa that Enrique told his father and mother of his aspirations. Then he flew to Toronto, where no one knew him and he could concentrate just on music, to record for five months.


That first album, Enrique Iglesias (1995), sold more than a million copies in three months (it earned him his first gold record in Portugal in a mere seven days) and to date has sold more than six million worldwide. The second album, Vivir (1997), enjoyed global sales of more than five million discs and launched his first world tour, backed by sidemen for Elton John, Bruce Springsteen, and Billy Joel. In a mere three years, Iglesias had sold more than 17 million Spanish-language albums, more than anyone else during that period. (The U.S. was his biggest market.) He also won the 1996 Grammy for Best Latin Performer, 1996's Billboard Artist of the Year, Billboard's Album of the Year for Vivir, two American Music Awards, a World Music Award, eight Premio Lo Nuestro awards, two ACE Performer of the Year awards, and ASCAP prizes for Best Composer of 1996 and 1997, in addition to countless accolades around the world.


With 1998's Cosas del Amor, Iglesias moved to more mature content; his earlier material had been written when he was 17 years old. Then came Enrique, his first Interscope album and first in English. It achieved gold or platinum status in 32 countries and brought his global album sales to a total of more than 23 million. In 2001 he released the follow-up, Escape. Iglesias alternated Spanish- and English-language albums during the next two years, first offering the ballad collection Quizás in 2002, then the mainstream English record 7 in 2003. Four years later the single "Do You Know (The Ping Pong Song)" announced the coming of his 2007 album Insomniac. After a Spanish compilation in 2008, Enrique released Euphoria in 2010, which gained attention on the strength of the singles “I Like It” and “Heartbeat" Ed Nimmervoll, Rovi